At Boston University I worked on several projects. My main focus was analyzing nearly 6000 larval fish from a reef on former US base at Johnston Atoll. My supervisors, Phil Lobel and Paul Barber, were interested in the physiological impacts on the marine fish of various contaminants (e.g. PCBs) present on the reef. Collections of larvae from a damsel fish (Abudefduf sordidus) from nests were made during two breeding seasons and I used newly developed microsatellite markers to infer parentage.

I also worked on two substantial side projects while at Boston University. In collaboration with Paul Barber and Elizabeth Jones, we made a comparison of selective mortality and genetic identity (Meekan et al 2007). In collaboration with Jason Philibotte and Paul Barber, we conducted a study of the population structure of the reef fish Plectroglyphidodon imparipennis. 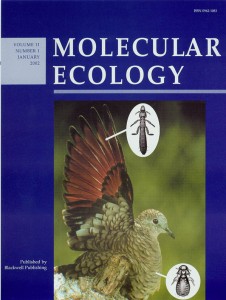 At the University of Utah my thesis project focused on the host specificity of feather feeding lice on their North American Dove hosts. North American Doves are host to two genera of feather feeding lice (Columbicola or “Wing lice” and Physconelloides or “Body lice”). Based on previous research they differed in their host specificity with body lice being more host specific (usually one host per species). I spent three years collecting preliminary data for my thesis project, getting real estimates of host specificity and abundance records of the different lice on the hosts of interest (Moyer et al 2002). The work was a combination of lab studies and field work. Most of the field work was conducted in Southern Texas (Weslaco) or in Southern Arizona (Tucson) where I spent my time mist netting doves and collecting lice. A major project that I worked on was comparing methods of quantifying lice on avian hosts (Clayton and Drown 2001) where I was able to use the ultimate tool in removing lice from deceased birds, a paint shaker!

I also worked with Kevin Johnson during my time at Utah. We started several projects in theoretical phylogenetics eventually working on a new method of cophylogenetic analysis (data based, rather than tree based) (Johnson et al 2001). It was during this time, that I became very interested in theoretical work and computer simulations. I also started to change the focus of my research interests to the population level (Johnson et al 2002).

At Grinnell College I conducted a year long independent project on the molecular phylogenetics of North American oak galling Cynipid Wasps. For the project, I collected mtDNA sequence data from COI via manual sequencing (no fancy capillary machines then, just lots of hand poured acrylamide gels and radioactivity) and used this to infer the phylogenetic relationships of several genera within a family. I was also interested in testing the monophyly of these genera as they were being using in a ecological study of host specificity. This work was a collaborative project between Jackie Brown and Warren Abrahamson. This was an excellent experience for me as an undergrad. Through this project, I went to my first Evolution Society meeting and was able to attend several other meetings in the course of the year. I presented the final work at the 2nd International Symposium on the Biology of Gall-Inducing Arthropods in Hungary. 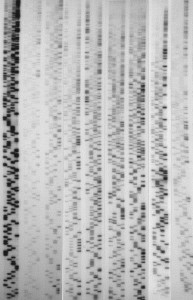